Saturday 13th September saw the first live football match of the season for me. Leeds United have had what some would call an eventful season both on and off the pitch. The die hard supporters like myself would argue that this is quite simply the norm. The away trip to St Andrews is always a pleasure if not solely for the fact that Birmingham City seem to be treading on similar grounds to us.

The sun was out for what turned into a pleasant trip to the ground as me and my friends who are all blue noses greeted the lunch time kick off with similar uneasy expectations. The Sky cameras had their typically unwelcome effect by keeping some fans on their sofas at home. This however is not the problem for Leeds United as we managed to easily sell out our allocation of 2,600.

I was once again undercover sitting in the Home end with my friends and an uninspiring first half saw Birmingham take a deserved lead as the game headed into the last 10 minutes of the first half. The most entertaining moment to come from this dire situation was the fact the shot broke the post holding the net up. After almost 9 minutes the net was repaired and we were put through the torture of 9 minutes of fruitless injury time.

The traditional half time Bovril couldn’t lift my mood as Birmingham City’s fans around me were talking positively of their first half exploits. I wasn’t exactly sure if it was because they were playing amazingly or more likely it was the fact that we were piss awful.

As the second half started our caretaker manager Neil Redfearn who is more commonly known on Twitter as #doitforredders threw an extra man in midfield which immediately put Birmingham on the back foot. A couple of changes at around the hour mark saw Doukara and Austin introduced to add muscle to the side.

It worked immediately and the slim line fuel efficient Austin seized control in the middle of the park. Doukara oozed power and purpose and the hard working Antenucci never gave up. Ironically it was a mistake my Birmingham that presented my man of the match Alex Mowatt with the opportunity to burst into the box and slot the ball past their keeper. This was a neat finish and a deserved equalizer.

As the game headed into the final ten minutes it became an end to end battle with Birmingham going the closest to snatch the win. A penalty call that bizarrely went our way prevented the opportunity to lose a hard fought point. It wasn’t a penalty but you just don’t expect those decisions to go your way when you are the away side. Another late chance saw a header flash wide and a superb goal line clearance by Warnock.

The whistle brought the game to a well deserved share of the spoils. Birmingham have certainly improved on last season whilst Leeds United displayed some fantastic quick passing moves which resulted in some positive attacking moves. Overall I was very happy with the point and am now very excited about the prospect of visiting Elland Road for the first time this season on Saturday against Huddersfield.

Leeds managed to follow this draw up with a splendid 3-1 at Bournemouth which saw caretaker boss Redfearn earn his 7th point from 9. Leeds United find themselves in the lofty position of 13th heading into this fierce Yorkshire Derby, it will be one titanic battle for sure!

As I sit down completing my usual Away prematch ritual, I find myself slightly more excited than normal. The drive down today was pleasant and parking the car a minimal exercise. I’ve had a lovely burger and ale at Mollonys along the High Street and the wander to the ground was not only paved by the golden shirts worn by tonight’s hosts.

The sunshine is out on a pleasantly warm Spring Evening and the buzz amongst the Leeds United faithful brings back similar memories of that Summer night Semi Final playoff at Elland Road against Preston. It’s been one amazing story since the news broke out on Saturday afternoon that Cellino won his appeal against the Football League. 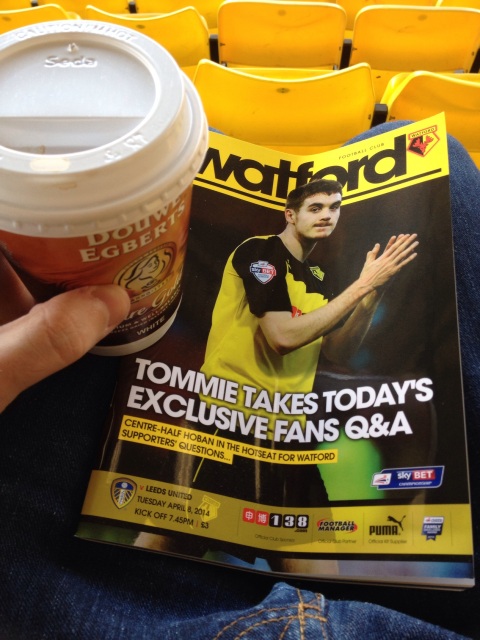 Tonight as I headed towards Vicarage Road the news broke that Massimo Cellino had officially taken control, the promise this takeover brings is unknown but for one thing it’s come at the ideal time. Reports of the club declaring debts of £9.5m a handful of months before the Football Leagues fair play rules come into play confirms once again that this was needed to not only compete but to survive.

As I sit soaking up the inevitable vocal support that we bring to every ground we visit, I wonder what the future brings. Vicarage Road is a ground currently going through some development and the new stand being built to my left is a visual state of intent from the Pozza family keen to get Watford up to the promised land.

Since 2006 and that horrible memory at Cardiff it’s clear to see that whilst Watford enjoyed a year in the Premiership, Leeds United via League One are now competing on a level playing field. Tonight sees Leeds v Watford, Cagliari v Udinese, Cellino v Pozza, it’s Italy v The Football League.

So as kick off approaches let’s enjoy this moment a little longer. It’s fun being a Leeds fan!

From Miami with Love… (Via Cagliari, destination Leeds)

Heading into the final few hours of GFH’s deadline to the Football League, we are still none the wiser as to what Harvey is playing at. For those remaining positive, Cellino will have his horse released from the impound and allowed to ride through the once barricaded gates of Elland Road. For those hell bent that the Football League are drawing things out just to rile us all further before denying us salvation, well, ummmm it’s not looking great, we’ve been there before.

So what is going on behind the scenes of the Football League tonight? If there’s one thing that many of us don’t need reminding of, it’s never simple at Leeds United. It’s as if the rule book for all 72 Football League clubs has a separate subsection for our club. For those young enough to vaguely understand who Ken Bates is, I envy you! So why is this hold up happening, especially with Shaun Harvey on board in the Football League?

It seems to stem from one main issue, is this a Legal Case or is it in fact a Civil Case? Now in law the difference is quite clear, however because Leeds United are involved in the equation, it’s not. Not even Rachel Riley could work this out within 30 seconds, the Football League mind you seem to be nearing on 60 days with still no answer. It’s simply unacceptable and embarrassing with a hint of to be expected and dash of typical Leeds luck.

In my opinion and I always tread on the side of caution when expressing this, GFH have publicly stated what the majority of us fans have been asking amongst ourselves. Why has it taken so long and how on earth are we supposed to move onwards with such a large cloud of uncertainty unfairly hovering over our potential owner? To be fair to Cellino he has just let this carry on. He has been complimentary to the Football League and their high standards in conducting this investigation.

The real danger now is what if the Football League deny him ownership of Leeds United? Well David Haigh has come out to quash the fears of administration and a report in the Mail yesterday from a finance expert says it’s not the end for the club. Are these simply statements put out to calm us or is there really truth behind this?

I’m remaining positive whatever the outcome of this ruling on the ownership of Leeds United. If Cellino doesn’t pass the test, then I’m sure we will utilize Plan B but this will be heavily dependent on us the fans. Is this fair? Well I think we are bloody lucky with what we have. Just looking at the League 2 table this evening stunned me to see Portsmouth a couple of defeats away from being in the Relegation Zone. A club like Pompey that only five years ago lived the Premiership Dream, who tasted Silverware, played in Europe and has a wide captive supporter base in it’s own city. It sounds very similar to our club, ok I know we have more fans!

The point of this post is not to spell doom and gloom for Leeds. Cellino could be our knight in shining armor, however on the night of the January transfer window closing it couldn’t have been more opposite. All I am stating is had Leeds beaten Bolton and Reading at home and held on to win at QPR, would we be so hell bent on abusing the current set up on Social Media? Football is so very delicate like that.

Anyway one other thing that I noticed at Burnley last weekend before I depart. Leeds United fans at the game are not always the ones filling Twitter full of negative comments on match day! 😉 let’s get behind the lads against Millwall on Saturday if you are there or like me unable to make it!