In a week that started with more Tuesday night humiliation who could have predicted the way it would play out by Friday evening. Following his successful purchase of Leeds United, Massimo Cellino celebrated in the way most Yorkshire folk do, by hitting the local for a pint or two.

In an alternative look at this weeks events we start at The Old Peacock. Massimo Cellino has just secured his purchase of Leeds United and in the process posed for a photo or two with some fans. Massimo quipped in a somewhat believable Yorkshire/Italian accent that “he was-a extremely excited, hey hey, a, bellisimo pleased to be-a in charge of ze greatest team in a England” he followed this by saying “hey up love, I’ll av another pint of 1919”

David “Devil” Haigh hits the local news by stating his intent to join Massimo as his Chief of stationery ordering, it’s at this point nobody questions his purchase of security equipment via his Staples online account. This turns out to come back and haunt him as the week draws to an end. David is politely told by Massimo to “join the devil and burn in hell” it’s still not clear who he means as last week Haigh was referred to as the devil by Massimo. 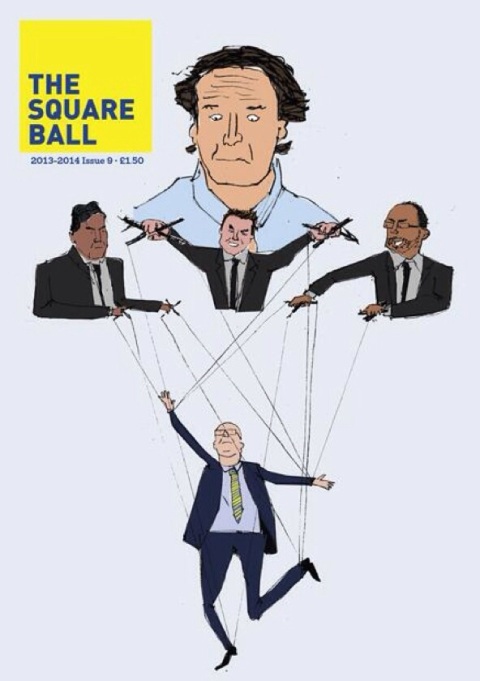 The Square Ball threw their opinions out into the open and the most creative cover seen in a long time confirmed what we’d all feared. Poor old Brian has been controlled by Haigh, Patel and Narooooodin. Sadly for us it’s become apparent that despite the harmony we were led to believe, Brian has been pulled in all directions. It’s still a mystery as to who controlled his hand that threw his little notepad in the dug out. The said notepad was last seen in the Vicarage Road turf as Wootton and Lees gave Watford a 3rd goal.

Friday saw the most bizarre twist yet as Cellino opened up an Order Confirmation addressed to the Chief of Stationery ordering. Nobody knows the exact date of this document but it confirmed the purchase of some not so discreet security cameras. Some think it could date back to the purchase of Gold Fish in the Quidsdale days, however if this is the case then he negotiated some pretty damn good repayment terms which makes it highly unlikely, ruling him out.

Once Massimo called in the CSI Leeds crime lab to carry out a thorough sweep of Elland Road, Haigh quickly departed grasping his belongings including the shiny Leeds scarf he wore for his photos at the club. Now whilst the timing of his resignation is purely coincidental the further discovery of cameras in the toilets has done little to help his defense.