We decided to take advantage of the late May Bank Holiday break and packed up the tent for the first camping trip of 2014. The Destination was York, to revisit a city I fell in love with in my early teenage years. I’d hoped to study at Askern Bryan in York for my Diploma before a change of events put that dream to bed. Despite this disappointment I have always loved this city and couldn’t wait to explore it properly with my fiancé.

The weather forecast was mixed which suited us perfectly. This kept changing as we drove up the M1, M18 and finally the A1 as we were greeted by Wagtail Park and the hardest of grounds to pitch our tent on. We were asked to bring Rock Pegs which on first inspection seemed like overkill. It wasn’t until I cockily hit a standard peg into the lush green grass that I discovered it was merely a topping. What lay under this welcoming layer was a silt filled, rocky mixture of quarry type material. After a dash to the local camping shop we had enough rock pegs to erect our tent and canopy securely.

By the time we’d pitched the tent and got camp set up it was too late to wander too far away. There was a lovely fishing lake close by which we walked around and after we’d cooked some chili and drank a couple of beers we watched a film and called it a night. It wasn’t the coldest of nights, however as it was our first camping trip in nearly 9 months we needed to acclimatize. We survived the night and after a late breakfast which comprised of a bacon roll we headed into York.

The Park & Ride is quite simply excellent value for money. To park the car and get a return ticket cost £2.70 each which is far cheaper than parking in the city centre. We used the Sunday afternoon to explore the streets of the city as well as sampling some of the local food and ales. We walked up the Shambles which is a quaint cobbled narrow street lined with shops on both sides. The hustle and bustle of the bank holiday crowd evident and we were caught on a wave of visitors. 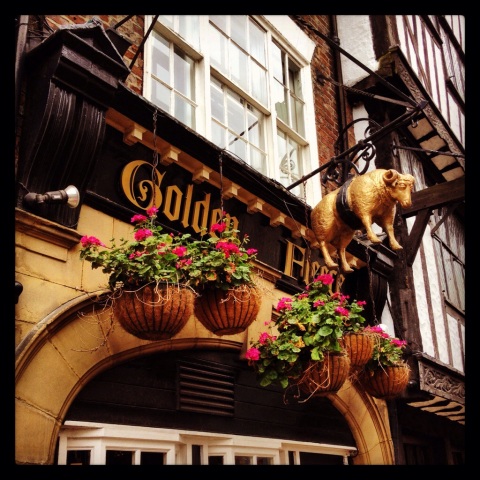 We had our Sunday Beef Roast at The Golden Fleece which is the oldest pub in York. It is also the most haunted pub in the city, a claim backed up by the Most Haunted crew, who spent a weekend filming here in the pub/hotel. The place itself is typically quirky and feels very welcoming. There are a couple of skeletons that sit at the bar on a stool and also in the pub garden. All of the floors are wonky and slanted, so much so that my pint of ale was slanted and the gravy was trying to escape from my plate. A quickly constructed defensive wall using my mashed potato prevented any casualties. When we sat for dinner my fiancé did feel a cold sensation next to her side which hung around for a few minutes. It certainly backed up the claims of the owners and many guests who have stayed there.

We had a walk around Parliament Street which is the widest most open street in York and also had a tour of the York baths. This was conducted by a very knowledgeable Canadian historian by the name of Ryan, who not only told us about the Roman Baths in York, but also covered wars, deaths, Christianity and many other topics. By the time we left this small room which gathering heat the longer we stayed down there we were gasping the fresh air to celebrate our freedom. Joking aside it was well worth the £3.50 it cost plus a small contribution to Ryan’s education costs!

By a friends recommendation (thanks Aimee) we went to an off license called The House of the Trembling Madness. Above this there was also a bar which quite simply oozed class and style. The decor comprised of stuffed animals and randomly placed gothic designs framed by some stunning timber open framed roof trusses and beams. The place was busy and the small number of chairs and tables filled. The bar was small and quaint and the food smelled delightful. We helped ourselves to a couple of IPA’s and shopped till we dropped as I was reunited with some of my favourite Australian beers imported in their shop. 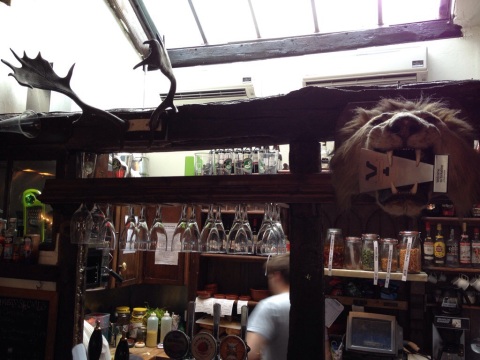 We returned to camp just before the forecasted rain and had a very chilled out Sunday night. We ate some cheese and crackers and watched Taken 2 and the first half of American Hustle. Following on from last nights shock chill factor I put on an extra layer in an effort to get a warm comfortable nights sleep to get me in good stead for Mondays day of adventure. Historical visits, walks, haunted sightings and more local pubs awaited us, we certainly had a lot planned!

One final York related story before I bring this 1st Part of the blog to a conclusion. There are cats all over the city on various buildings. It is said that any building that is graced with the presence of a cat, is a happy place. We spotted a couple of these cats with one been on the front of The Golden Fleece Pub. Based on this story, I think it’s safe to say that my fiancé encountered a good happy spirit!