Saturday 13th September saw the first live football match of the season for me. Leeds United have had what some would call an eventful season both on and off the pitch. The die hard supporters like myself would argue that this is quite simply the norm. The away trip to St Andrews is always a pleasure if not solely for the fact that Birmingham City seem to be treading on similar grounds to us.

The sun was out for what turned into a pleasant trip to the ground as me and my friends who are all blue noses greeted the lunch time kick off with similar uneasy expectations. The Sky cameras had their typically unwelcome effect by keeping some fans on their sofas at home. This however is not the problem for Leeds United as we managed to easily sell out our allocation of 2,600.

I was once again undercover sitting in the Home end with my friends and an uninspiring first half saw Birmingham take a deserved lead as the game headed into the last 10 minutes of the first half. The most entertaining moment to come from this dire situation was the fact the shot broke the post holding the net up. After almost 9 minutes the net was repaired and we were put through the torture of 9 minutes of fruitless injury time. 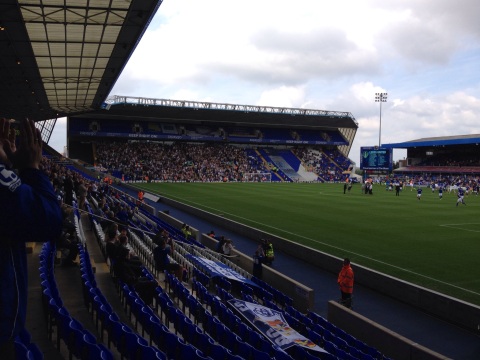 The traditional half time Bovril couldn’t lift my mood as Birmingham City’s fans around me were talking positively of their first half exploits. I wasn’t exactly sure if it was because they were playing amazingly or more likely it was the fact that we were piss awful.

As the second half started our caretaker manager Neil Redfearn who is more commonly known on Twitter as #doitforredders threw an extra man in midfield which immediately put Birmingham on the back foot. A couple of changes at around the hour mark saw Doukara and Austin introduced to add muscle to the side.

It worked immediately and the slim line fuel efficient Austin seized control in the middle of the park. Doukara oozed power and purpose and the hard working Antenucci never gave up. Ironically it was a mistake my Birmingham that presented my man of the match Alex Mowatt with the opportunity to burst into the box and slot the ball past their keeper. This was a neat finish and a deserved equalizer.

As the game headed into the final ten minutes it became an end to end battle with Birmingham going the closest to snatch the win. A penalty call that bizarrely went our way prevented the opportunity to lose a hard fought point. It wasn’t a penalty but you just don’t expect those decisions to go your way when you are the away side. Another late chance saw a header flash wide and a superb goal line clearance by Warnock.

The whistle brought the game to a well deserved share of the spoils. Birmingham have certainly improved on last season whilst Leeds United displayed some fantastic quick passing moves which resulted in some positive attacking moves. Overall I was very happy with the point and am now very excited about the prospect of visiting Elland Road for the first time this season on Saturday against Huddersfield.

Leeds managed to follow this draw up with a splendid 3-1 at Bournemouth which saw caretaker boss Redfearn earn his 7th point from 9. Leeds United find themselves in the lofty position of 13th heading into this fierce Yorkshire Derby, it will be one titanic battle for sure!