← Victorious at Huish Park
A time to reflect on the positives →

I’ve been a Leeds United fan for as long as I can remember, thanks Dad! Where I can honestly say I’ve enjoyed experienced the thrills of winning the title in 1992 when I was 13, I can say the heartbreaks of losing at Bolton & Home to Ipswich have made me stronger over the years.

These last few weeks have made me think long and hard about what’s going on at Elland Road. I kinda got the whole lets get behind our manager and revolt against the decision to sack him which was handled terribly. However I made a valid point before the win at home to Huddersfield when I questioned if our response had been the same if Brian McDermott wasn’t so nice, transparent and genuine.

I waited for the barrage of abuse from fellow Leeds fans but was surprised to hear some support of my comments. You need to bear in mind that this was right after the attempted sacking of Brian and the emotion was raw. I also made my feelings known about getting behind Cellino and his bid to buy our club. 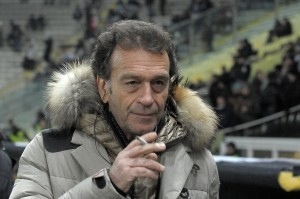 Where Sport Capital were failing to get the deal done in time so we could move on, Cellino was desperate to buy the club from GFH. You can’t blame GFH for accepting the bid from Cellino, especially as he wanted a quick transaction. Contracts were duly exchanged and now we wait on the decision from the Football League to see if he meets their criteria.

Let’s get a few things straight about Cellino. He wants to buy our club and he wants to buy back Elland Road. He understands the importance of focussing on one club and has put the wheels in motion to sell Cagliari. He has the finances in place to realize the dream of strengthening a playing side that can get promotion.

Cellino has numerous contacts and has proven in Europe that Coaches work better than Managers. He may get through them, but he wants success and when parting with £25m then why the hell are we to question him? Basically who cares about his past? These were a long time back and not all Football related. Cagliari have always been financially supported and he has kept them in Serie A. This is exactly what we need and should be craving for, our Leeds United back in the Premiership.

The bottom line is to enjoy this possibility then we need to back Cellino. We need to take this opportunity because how many times have we had cash rich prospective owners who never actually materialized. The list is long…..

Let’s say Celli-yes and stop being so stubborn and resistant to the exciting possibility of realizing our dreams.

← Victorious at Huish Park
A time to reflect on the positives →